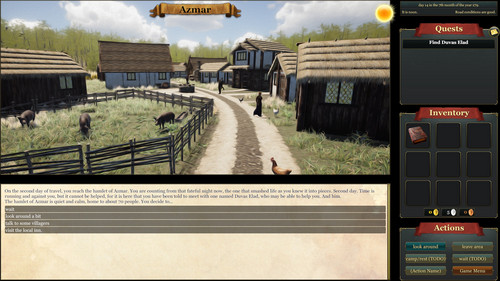 Legacy is a largely conversation-driven adventure game set in a fantasy world I am building. It stands out due to its focus on treating NPCs as real people with memories and reactions to your words, who are also connected to each other and gossip about you. In a medieval/fantasy society, your reputation matters.

You play the role of Nevan, a young man whose father has just been arrested and taken away by a local baron, and who has travelled to the neighboring barony following his father's mysterious last words...

Here are two screenshots from the current version. Alpha 5 is planned to be the last internal test version, before I make a wider release.

The above is a typical interaction scene. Like in old-school adventure games, the top shows an impression of the scene while the bottom is the area for descriptions and where you enter your actions and answers. The scenes are static images.

This is the map view which appears in several different places. For example, the two towns in the map also have town maps. In this view you can click on a place to select it and then the player token (visible in the right-center) will move there, using A* pathfinding.

One design decision I made was to have the world actually progress in time. The top-right shows a calendar with date, time and weather. At the moment, weather influences travel times on the map (i.e. when it rains a lot, then the roads are muddy and travel is slower until it has dried - which can take up to a day of dry weather, depending on various circumstances.)
There is also a day/night cycle, which has a few effects such as travel through the forest at night being dangerous and town gates and many shops closing at night. You can rent a room in an inn.

The game is using Unity 3D, all the dialogs are written in the Ink language, and the Love/Hate system (a Unity asset) does all the emotion, gossip and opinion tracking for me.

---
Status:
The game is currently in active development. A few preview versions have been shared with my Patrons and a few friends.
I am now at the stage where I'd like more feedback and testing, so I'm reaching out to a few of the communities around Unity, indie games and adventure/roleplaying games.
So if this kind of games are something you like, and you'd like to be a playtester, the deal is that you can have the current preview version under the condition of giving constructive feedback.

I'm also interested in general feedback about the UI, layout and everything else you see here.